JuicePoint is closed from the 21st December to 7th January. Shipping resumes on 14th January.

This article follows on from How many Electric Vehicles can I charge Simultaneously?

For examples below are for a domestic situation with 63 Amp single phase supply and two JuiceBoxes. However the same concept applies for larger installations and 3 phase installations.

With JuiceNet a load group can be defined for the JuiceBoxes and a maximum power consumption limit can be set. This has to be conservative due to the unknown load in the rest of the dwelling. 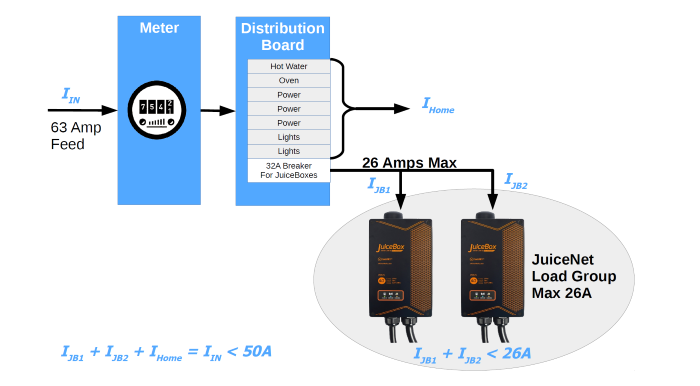 In this example two JuiceBoxes have been wired to a 32A breaker. Running the breaker and line at 80% capacity means a current limit of 26A (6kW) to be shared between the two JuiceBoxes.

For the Available Power Limit load sharing method the consumption of the rest of the dwelling is measured and subtracted from the available power available to the JuiceBoxes.

There are two options for measuring the power consumption of the rest of the dwelling.

A JuiceMeter can measure the load to the rest of the building.  80% capacity of 63 Amps is 50 Amps which is the maximum design load for the building. In JuiceNet a load group is defined with the two JuiceBoxes and the JuiceMeter with a limit of 50 Amps. Each JuiceBox is limited to 26A (6kW) running on a separate 32A breaker. This means up to twice as much power is available for EV charging compared to a Maximum Power Limit. 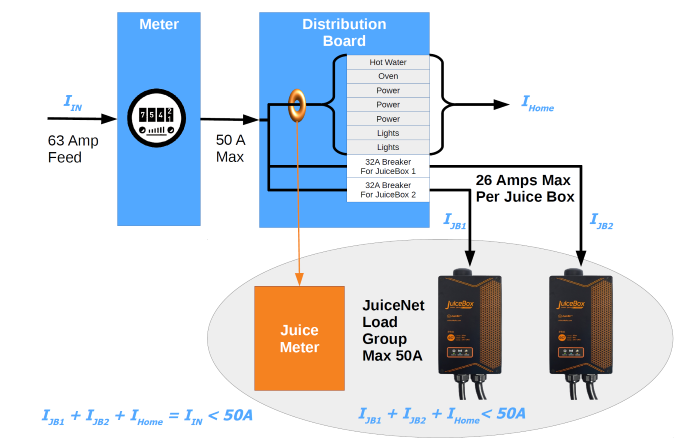 If you have solar panels and electric hot water heating, Paladin is a great way to make the most of your solar energy by managing the demand of the JuiceBoxes, your hot water heating and other loads in your home.  In JuiceNet a load group is defined with the two JuiceBoxes and Paladin with a limit of 50 Amps. Each JuiceBox is limited to 26A (6kW) running on a separate 32A breaker. You can even configure the JuiceBoxes to just use excess solar. 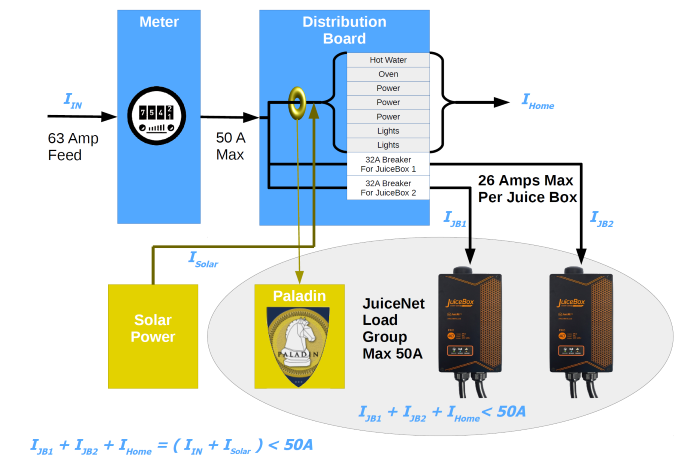 Please note the minimum available power per JuiceBox is 1.4kW or 6 Amps. Therefore the maximum number of JuiceBoxes that can run off a single 32A breaker would be 4.

If the average power for the JuiceBoxes per group is less than 1.4kW or 6 Amps, they will all shut down.

In these examples a 32A breaker has been specified which means the JuiceBox should be limited to a maximum of 6kW for charging to avoid tripping the breaker.

If charging at full 32A, 7.2kW on a single phase is required a higher rated breaker will have to be installed.

Please have the Load Sharing design reviewed by an Electrician to ensure it is suitable for installation.

Was this article helpful?